Without our wonderful volunteers U3A Noosa wouldn’t be the hive of activity we all know and love. Almost everyone volunteers their time and talents including the President, management committee, receptionists and tutors. Each month we introduce you to these hard-working people who contribute so selflessly to the smooth running of U3A Noosa. 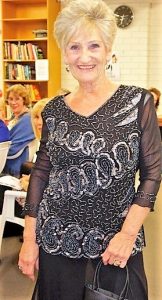 This month meet Kathleen Slinn, our dynamic Yogalates tutor, who has been running her weekly class at U3A Noosa for an amazing 23 years. Everyone who meets Kathleen is struck by her strong Scottish accent, her out-going personality and her enthusiasm for physical fitness and lifelong learning.

At the age of 19 Kathleen left Glasgow for New Zealand, where she worked as a secretary, though the stage and teaching yoga were always her real passions. Moves to Perth and then Noosa came much later and when she joined U3A Noosa she continued teaching yoga, which later morphed into yogalates – a fusion of yoga and pilates.

“I certainly put the class members through their paces,” says Kathleen, who is fitter than most people half her age. “I push myself to the limit and I ask the same of them. You hear a lot of moaning and groaning but I never force anyone to do more than they feel capable of.

“I love to be active so I do weight training, line dancing, go to the gym and volunteer at a hospital. I’m a keen gardener and I am trying hard to create a perennial garden, which isn’t easy in this climate.

“I been involved in many ways with U3A Noosa over the years including being the course coordinator and on the management committee, all of which I’ve enjoyed, and I’ve made some great friends here. It’s important for me to keep busy and to keep on learning – I would hate to stagnate. Even after 23 years running my class, I hope to continue for a long while yet.”

EXCURSION CINEMAWORKS 8/5/21Di Lang from the Audio-Visual Group has organised a visit to Cinemaworks If you are interested contact Di direct: Dianne Lang Mobile 0412 638 025Details:DATE: Saturday 8 May 2021TIME: 10 A.M. TO 12 noonADDRESS: Cinemaworks – Kev Franzi 2655 Eumundi Road KenilworthCOST: $10.00 per personLUNCH Maybe some people would like to go to the pub for lunch afterwards in Kenilworth.Kev Franzi will be talking about his new project the “Camera Obscura”.There is a lot to see at Kev’s Movie Museum and he is only too happy to talk about his exhibits.This is a great opportunity as Kev is retiring at the end of the year.TRANSPORT: On the day we should be able to meet at U3A to carpool.Additional Background see - www.cinemaworks.net.au/museum.html ...

COVID-19 Update 30March 2021Masks must be worn for all classes and whilst in Michell House and other U3A noosa venues.Do not attend if been in Greater Brisbane or Moreton region since 20 March 2021. Self-isolate for 3 days.Do not attend if unwell or have any flu-like symptoms. Have COVID test and self-isolate until receiving a negative result.All above apply until further notice. ...
View on Facebook
· Share