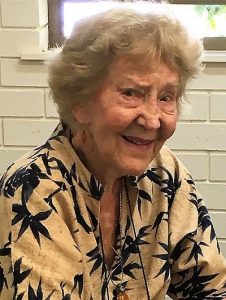 Each month we introduce one of the wonderful volunteers or tutors who ensure the smooth running of U3A Noosa. This month, for a change, we would like you to meet one of our most loyal and enthusiastic members.

Maggie Coad struggles to remember the exact year she joined U3A Noosa but she knows it was a long time ago, soon after it started. Since then she’s attended numerous courses, everything from art, calligraphy, German, French and many history courses, which she describes as “brilliant”.

These days, she is a member of the Solo group and listens to opera in On Screen Arias & Operas, music being among her many interests. She also attends many of the Friday afternoon lectures.

“I’ve been passionate about learning all my life,” says Maggie, who was a surgical nurse for many years before she retired. “When I moved to Noosaville I discovered U3A and it has provided me with so many opportunities to learn new things. I’ve also made some wonderful friends.”

“In the early days courses were held at a variety of sites and I remember some classes even took place in my home. Things are much more organised these days but the things that make U3A Noosa special are the same. People who are lonely, who have lost their partner, for example, have found great solace in this inspiring and welcoming place.”

Running alongside Maggie’s involvement with U3A has been her long standing dedication to working with refugees and asylum seekers, mainly through the Sunshine Coast’s Buddies Refugee Support Group, which is based in Buderim. Over 18 years she has helped support many refugees, and has visited internees in prisons across the country.

“Our treatment of refugees is something I feel very deeply about,” she says. “Working with them has probably been the main thing in my life.”