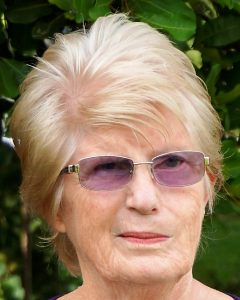 ONE of the first things Annie Lowe did when she arrived in the Noosa area ten years ago was to join U3A, because of her enthusiasm for the organisation and its concept of lifelong learning.

There was a second reason. Annie – along with three friends – had set up a branch of U3A in the Adelaide Hills, where she was living, and she wanted to continue her strong involvement with the movement.

Not surprisingly, Annie – and her experience running a branch – were warmly welcomed in Noosa. After a couple of years as a member she joined the U3A Noosa committee and two years later was elected President. She served in that position from 2015-17 and was replaced by our present President, Liz Gleghorn.

Annie is now one of two Vice-Presidents, and she takes responsibility for class allocation, serves on the curriculum planning committee and provides back-up for Liz in her busy role.

Annie’s involvement with U3A came after careers in architectural drafting and later, geological drafting, and – by contrast – nursing. At the same time, she was raising three children and is now grandmother and great-grandmother to quite a brood.

Her love of good architecture, which led to her first career, is hardly a surprise since her father and grandfather were both architects in Adelaide. An interest in architecture, and a lifelong love of all things Italian – the food, art, landscape and language – has taken her to that country for some memorable holidays.

Italian is just one of many classes Annie has participated in at U3A Noosa over the years, including art, computing and audio-visual, and she has tutored backgammon, mah-jong and scrabble groups.

“I try to learn something new every day. I believe it’s essential as we get older that we continue to have interaction with like-minded people. U3A Noosa is a happy place, full of wonderful people with amazing stories. We have several members here in their 90s and they are inspiring.”

And by the way, that Adelaide Hills branch of U3A is still going strong, thanks to Annie and her friends.