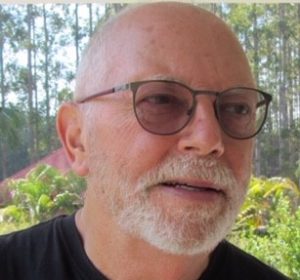 Retirement from a demanding and rewarding profession brings challenges for many people, not least where to find the intellectual stimulation they enjoyed in their careers.

It was a concern for Rod Elsworth, who five years ago stepped down from a full-time role as a forensic psychologist with the Queensland correctional system, and relocated with his wife Di from Kilcoy to the Sunshine Coast.

“I was moving towards retirement from my work as a psychologist and was looking for mental stimulation and activities to get involved with. I’m happy to say I found both at U3A Noosa. I was particularly interested in art and I joined the water colour group,” he says.

Not long afterwards Rod, who had extensive past experience in community organisations, volunteered as a member of the management committee and he is now in his second year as vice-president (alongside VP Annie Lowe).

Rod explains: “The role of the VPs is to support our President Liz Gleghorn, deputise for her on occasion and carry out a variety of other activities as they arise. For me, these duties have ranged from organising events, to developing policy and procedures such as emergency procedures and the tutors’ handbook.”

While U3A demands much of his time, Rod is involved in other community organisations, in addition to working part time as a member of the Queensland Mental Health Review Tribunal. Recently he’s been fighting fires as a member of his local rural fire brigade, and he maintains a strong interest in military history, a legacy from his 30 plus years serving with the Army Reserve’s Psychology Corps.

He continues painting water colours and since he and Di live on acreage there is always plenty of gardening and outdoor work to do, not to mention catching up with their adult children and grandchildren.

Says Rod: “U3A is such a worthwhile organisation and it meets a real need in our local community. We have an increasing elderly population with many people keen to enhance their knowledge and well-being. This is an organisation that provides for both.”