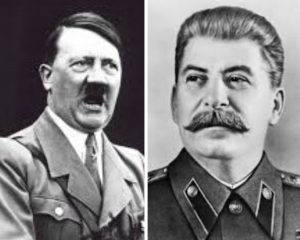 Expressions of Interest are sought for this First Semester  2020 Course:

This course explores the rise to power of Hitler and Stalin during the 1920’s and 1930’s and how they ruled Germany and the Soviet Union respectively. As two of the most ruthless dictators in history, the course explores a number of critical issues dealing with the nature of totalitarian power and especially the causes and dangers of extremist ideologies. It begins by asking who were Hitler and Stalin? What shaped their abnormal personalities? The course explores how the catastrophic impacts of World War One helped bring their respective regimes to power. The course will explore the popular appeal of Fascism/Nazism and Communism as Utopian ideologies show how Germany and the USSR were radically transformed by extreme ideas. How each regime relied on propaganda, indoctrination and terror will also be discussed and the course will conclude with a brief examination of the genocide that each regime inflicted on its people.  The course foreshadows the bloody conflict between Germany and the Soviet Union during World War Two but it does not cover the conduct of the war.

Dr Quentin Beresford recently took up a role as Adjunct Professor of Politics at USC after a 30 year career at Edith Cowan University in Perth. He is the author of a dozen books of non-fiction on a range of topics including the environment, biography and Aboriginal affairs. He has won five literary awards for his work.

At the beginning of the session a video of the play will be shown to familiarise members with plot and characters. Then in the following weeks, reading of the play and discussion on content – what does the plot convey to members etc – no right or wrong interpretation.

No prior knowledge of Shakespeare required. Just bring along your enthusiasm.

The first play we groundlings will be exploring, Love's Labour's Lost, is a play of witty banter and little plot, written during the early part of Shakespeare's literary career. First performed 1594-95, first printed 1598.

You will need a copy of the play LOVES LABOUR’S LOST for the 2nd week.

Once reading of the play Loves, Labour’s Lost is completed then we’ll start a new one using the same formula.

We will work our way, at a leisurely pace, through as many plays as possible before U3A closes for Christmas. ...

Timeline PhotosSo you received a letter from your employer your data has been breached? 🤔🤔

We know it is scary, but it is also becoming increasingly common. In the first six months of 2020 over two and a half million Aussies and Kiwis received one.

The team at IDCARE has compiled a shortlist of steps to take that will make life a little bit easier.

You'll find it in the latest edition of The Cyber Sushi. Signing up is free.

Timeline PhotosDo you know your phishing from your spoofing and your pharming? Understanding cyber-lingo is confusing! But we've made it easy for you in our latest edition of The Cyber Sushi.