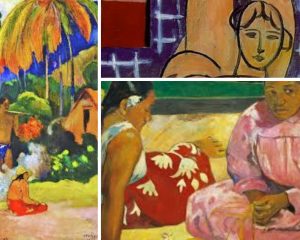 French artists Paul Gauguin and Henri Matisse visited Tahiti. Unrecognised during his lifetime, Gauguin is known for his experimental use of colour and depictions of Tahitian life. He abandoned his life in France to develop his unique approach while living in the islands of French Polynesia. Matisse loved his Tahitian sojourn, describing lagoons as “so blue, so blue it made the sky seem pale” and another “as green as absinthe”. This provided the source for his Oceania series of work. Captain Cook’s ‘Endeavour’ carried artists William Hodges and Sydney Parkinson who gave the world unique scenes of their contact with indigenous people. Other visiting artists included John LaFarge, who stayed in Tahiti from 1890 to 1891 and Ralph Burke Tyree, a US marine, who loved to paint in oils on black velvet. After the war, Tyree returned to work in Samoa and the islands he loved.

Retired from full-time teaching and residing in Noosaville, Zana enjoys sharing her passion for history and the arts with audiences of all ages.

In 2018 and again in 2019, Zana joined Royal Caribbean’s Radiance of the Seas as a guest lecturer, providing talks on culture and history while sailing the Pacific Ocean.

Zana has also worked with Oceania Cruises, based in Miami USA as an Artist-in-Residence. During 2012 she co-presented art workshops on cruises in the Mediterranean and the Caribbean. In 2016 she sailed as Artist-in-Residence on Insignia from Sydney to Los Angeles.

In 2016 Zana co-authored a book, ‘The Creative Pulse – 5 steps to stretch your imagination’. Now sold out in Australian bookshops, it is available through Amazon books on line and in local libraries.