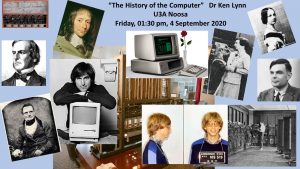 This talk describes the history of the computer and the men and women who made it happen. We start from the mathematicians of the 18th century and the development of mechanical computer through to the mighty mechanical machines of James Babbage in the 19th century and the first female programmer Ada Lovelace. Electrical computers were developed in the second world war for such purpose as code breaking as developed by Alan Turing before his tragic suicide. Gradually digital computers became general purpose machines with much competition between individuals and nations.  IBM finally gained a stranglehold on the monster main frame computers of the time. Small personal computers were made possible by the development of the transistor and integrated circuits which could be plugged together to make small machines produced by a new wave of small-time home- made computer fanatics. This gradually turned into the mass marketing  of the personal computer as developed by Apple and Microsoft under Steve Jobs and Bill Gates, from lowly beginnings and briefly by IBM.  The rise of the digital computer occurred in the working life of the lecturer who used most of the digital machines being discussed.

Born in 1940 and educated in Brisbane schools with a B.Sc, MSc. and Ph.D. in physics from the University of Queensland (1973). His PhD was on the propagation of Very Low Frequency (VLF) radio waves via the ionosphere which included the effects of solar x-ray flares. Ken worked in a large laboratory area (now Defence Science and Technology Group) of the Department of Defence in Salisbury, South Australia until retirement as a Principal Research Scientist in 1997. Fields of research covered radio astronomy, radio navigation, radiowave propagation via the ionosphere and ionospheric physics in general. Subsequently Ken has worked for many years as a private contractor to the Department of Defence in support of the Australian Over-The-Horizon radar system as well continuing with private research. He has been able to continue working and publishing in retirement because he can write his own unique computer software and has continuing access to ionospheric data. He and his wife June moved to Noosa in 1999. His hobbies include playing classical piano music and surfing as well as giving Noosa U3A lectures on science, history and music since 2000

At the beginning of the session a video of the play will be shown to familiarise members with plot and characters. Then in the following weeks, reading of the play and discussion on content – what does the plot convey to members etc – no right or wrong interpretation.

No prior knowledge of Shakespeare required. Just bring along your enthusiasm.

The first play we groundlings will be exploring, Love's Labour's Lost, is a play of witty banter and little plot, written during the early part of Shakespeare's literary career. First performed 1594-95, first printed 1598.

You will need a copy of the play LOVES LABOUR’S LOST for the 2nd week.

Once reading of the play Loves, Labour’s Lost is completed then we’ll start a new one using the same formula.

We will work our way, at a leisurely pace, through as many plays as possible before U3A closes for Christmas. ...

Timeline PhotosSo you received a letter from your employer your data has been breached? 🤔🤔

We know it is scary, but it is also becoming increasingly common. In the first six months of 2020 over two and a half million Aussies and Kiwis received one.

The team at IDCARE has compiled a shortlist of steps to take that will make life a little bit easier.

You'll find it in the latest edition of The Cyber Sushi. Signing up is free.

Timeline PhotosDo you know your phishing from your spoofing and your pharming? Understanding cyber-lingo is confusing! But we've made it easy for you in our latest edition of The Cyber Sushi.