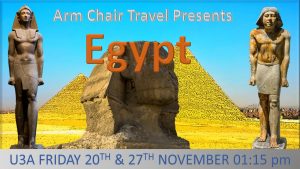 Over four thousand years of history awaits you! Travel along with Susan and Alan Roberts on an Armchair Travel expedition of Egypt. Visit the Pyramids of Giza, tour the ancient Egyptian capital of Memphis, marvel at the huge Statue of Rameses II. Travel across the desert stopping at a medieval Coptic Monastery. On the Mediterranean coast, Alexandria awaits you, with its mixture of ancient Egyptian and 19th century French architecture. We pay our respects to the fallen at the Alamein military museum and commonwealth cemetery. Then we fly to Luxor to wander through the extraordinary temples of Karnak and Luxor with a visit to the Valley of the Kings and its amazingly decorated tombs of the Pharaohs. And that’s only the first part.

In the second part we take a cruise down the Nile to Aswan watching the fascinating Egyptian countryside float by. At Aswan we visit the High Dam the beast that has tamed the Nile and created Lake Nasser. Wonder at the unfinished Obelisk, visit the temple of Isis located on an island in the middle of the Nile. Drive across the Sahara to the world heritage site of Abu Simbel and stroll around the magnificent monument to Rameses II saved by UNESCO from the flood waters of Lake Nasser. A flight takes us back to Cairo where we spend the last part off our adventure visiting the Arab souk, the world-famous Mosque of Muhammad Ali and finally the unbelievable Egyptian museum packed full of wonders from the ancient world of Egypt. Of course, no visit to the museum would be complete without experiencing at the treasures of King Tutankhamun. So, don’t miss out. Be at U3A by 1:15 on Friday the 20th and 27th of November ready for a boarding call.

Thinking of buying a caravan online? Steer clear of the scammers

Discover what's happening in U3As across Australia.
The November edition of the U3A Alliance Australia newsletter is now available for your interest and information: www.u3aqld.org.au/uploads/1/2/5/2/125247056/u3aaa_bulletin_no._30_november_2020_11.pdf ...