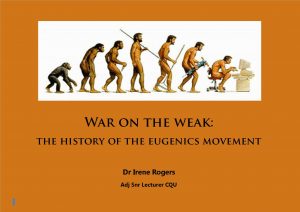 Irene’s research interests are in the history of medicine during war and in the history and philosophy of science. She has published many articles and presented academic papers at conferences in London, Spain and across Australia.

Irene has also worked extensively in humanitarian nursing in areas of conflict as a clinician and educator and also in remote Australian indigenous communities. Before the pandemic, she travelled each year to places such as Sri Lanka and Zimbabwe to work as a volunteer health educator and clinician. She has also been a guest lecturer on a river cruise on the Ganges exploring the hidden story of the women of the Raj.

Summary of the talk

The war on the weak: the history of the eugenics movement

The term eugenics comes from the Greek word “eugenes“, meaning “well-born”. Eugenics seeks to engineer through “science” a better human race by purposefully selecting good traits and eliminating bad ones. This is very common aim when breeding “non-humans” such as livestock and pets.

Over the years, eugenics had many proponents, from some of the greatest and most admired thinkers in ancient civilisation such as Plato to the most abhorrent and well known example in modern times, Adolph Hitler.

In this talk, we will explore the popularity of these ideas across the world during the early to mid-20th century and how laws were passed by various governments to further the aims of human improvement through better breeding. Australia was one of those countries.

The horror of the way in which Nazis took Eugenics to unimagined extremes, ensured that after the Second World War the movement largely disappeared from public view.  But have we given up on the struggle for human perfection?

Expressions of Interest sought: ENERGY AND THE PLANET 2021An insight into the Earth’s climatePresenter: John TurnerIn this course you will study how science is used to discover the basic laws of nature. Can these laws explain the energy changes in the atmosphere? Do these changes affect the Earth’s temperature? No previous knowledge of science is required just a curiosity, a willingness to ask questions and to participate in the discussions. The course aims to improve your understanding of basic science concepts such as: energy, mass, heat, work, temperature, radiation, gases, atoms, molecules, ions, force, gravitational fields, magnetic fields to enable you to decide whether the Earth’s climate could be controlled by the emissions of carbon dioxide from the burning of fossil fuels or whether it is driven by the natural cycles of the Sun.You will learn about: the nature of science; the origins of the greenhouse effect; how a real greenhouse works; the strange concept of heat; the temperature of the Sun; energy and radiation; the most important atom on Earth; the life cycles of the stars; extra galactic particles; carbon dioxide and coral reefs; Environmentalism; the Electrical Age; Energy in the Future. The classes will be held upstairs in the Language Room on Mondays from 1.00 to 3.00.The course starts on 15th MarchAbout the Tutor:John has a degree in Science with majors in Physics and in Chemistry, a Master’s degree with first class honours in Science Education and a post graduate diploma in computers and the teaching of digital electronics. He has taught HSC Physics; was the inaugural Science Adviser for the NSW Dept. of Education Centre for Research in Measurement and Evaluation, was a member of the NSW Science Syllabus Committee, has lectured in Science Education at university and was a Member of the Australian Institute of Physics. ...

Expressions of Interest sought: THE KENNEDYS: THE PROMISE AND THE TRAGEDY OF THE 1960sPresenter: Professor Quentin BeresfordRelive the 1960s! The election of the charismatic President John F. Kennedy in 1960 symbolised the transition to a post-war younger, more idealistic generation. His assassination in November 1963 shocked America and the world. The course will focus on the Kennedy family and their times. Against a rising concern over civil rights for African Americans, entrenched poverty, the rise of the mafia and the threat posed by the Cold War, the course examines JFK’s response to these challenging issues along with the role played by his Attorney-General and brother, Bobby. After JFK’s assassination President Lyndon Johnson took up the Kennedy mantle to push through some ground-breaking legislation. As the 1960s progressed, America fractured over the Vietnam War and young people’s challenge to establishment values. It was gripped by violence in 1968 over student protests and the assassinations of civil-rights leader Martin Luther King and presidential aspirant, Bobby Kennedy both of whom wanted a new direction for America. These turbulent and interesting times reveal the bright and dark sides of America at a critical time. Lecture sequence:1. The setting: Joe Kennedy (the patriarch), the rise of the Cold War and the ‘red scare’ 2. The 1960 election and Kennedy’s new style of presidency. 3. Nuclear winter averted: the Cuban Missile Crisis4. Martin Luther King and the Civil Rights Movement5. Lone gun or conspiracy? the assassination of JFK6. Lydon Johnson and the Kennedy Legacy7. A nation divided: the Vietnam War 8. Conflicts over cultural change: young people, women and environmentalists 9. The end of the 1960s: violence, the Manson murders the assassinations of Martin Luther King and Bobby KennedyAbout the Presenter:Dr Quentin Beresford recently took up a role as Adjunct Professor of Politics at USC after a 30 year career at Edith Cowan University in Perth. He is the author of a dozen books of non-fiction on a range of topics including the environment, biography and Aboriginal affairs. He has won five literary awards for his work. ...