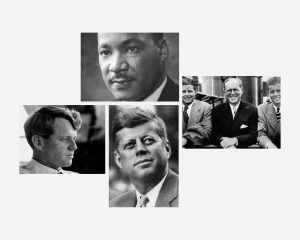 Relive the 1960s! The election of the charismatic President John F. Kennedy in 1960 symbolised the transition to a post-war younger, more idealistic generation. His assassination in November 1963 shocked America and the world. The course will focus on the Kennedy family and their times. Against a rising concern over civil rights for African Americans, entrenched poverty, the rise of the mafia and the threat posed by the Cold War, the course examines JFK’s response to these challenging issues along with the role played by his Attorney-General and brother, Bobby. After JFK’s assassination President Lyndon Johnson took up the Kennedy mantle to push through some ground-breaking legislation. As the 1960s progressed, America fractured over the Vietnam War and young people’s challenge to establishment values. It was gripped by violence in 1968 over student protests and the assassinations of civil-rights leader Martin Luther King and presidential aspirant, Bobby Kennedy both of whom wanted a new direction for America. These turbulent and interesting times reveal the bright and dark sides of America at a critical time.

Dr Quentin Beresford recently took up a role as Adjunct Professor of Politics at USC after a 30 year career at Edith Cowan University in Perth. He is the author of a dozen books of non-fiction on a range of topics including the environment, biography and Aboriginal affairs. He has won five literary awards for his work.

To all the gardening enthusiasts out there - if you missed Kaye Roberts-Palmer's talk on "Bird Bee and Butterfly gardens" and "Sensory gardens" this afternoon - you missed an absolute gem! ...

Expressions of interest are sought for the 2021 course:BackgammonThursdays 12.30 – 2.30 PM Starting 18TH February 2021 – Games RoomTutor: Damon ParkerDamon loves to teach and also to play games, so it seems appropriate to combine those two passions. Backgammon helped him learn to count a long time ago when he was young and again 15 years ago, after losing his sight and sustaining permanent injuries due to an accident. The game can be competitive, yet, is more about having fun whilst playing, and Damon think he can truly help people to learn the beauty of the game. He's played for more than thirty-seven years, and taught more than eighty people to play and enjoy backgammon, which Iis thought to be the oldest game known to the western world. Damon now Visually impaired, but learnt the game whilst sighted. He now plays in his mind; and not too badly we have been told.Damon is looking forward to making new friends, who also wish to learn this great game, and he's especially excited to share his knowledge. ...