Title: “Beyond the Barcoo”

This is an exploration of Queensland’s Channel Country and Gulf Savannah.

It’s about red dirt, dark rocks, tuffets of spinifex and clumps of Mitchell grass; about slender pale trees and others, black and grotesque. It’s about flat-topped jump-ups, and dry rivers that, on the rare occasions that they run, flow out across braided flood plains towards the interior.

They say that the real outback starts beyond the multiplicity of channels etched by the Barcoo River and so that’s where we’re going.

We’ll visit Emmet, a ghost town on the great western rail line that now has a population of just two; we’ll go to the top of Mount Slocombe and watch the sun descend into infinity. We scramble to the top of Starlight’s Lookout where cattle thief Harry Readford kept a lookout before stealing a thousand head which he drove to South Australia.

We’ll get an idea of the seasonal nature of the rivers that combine to form Cooper Creek before it heads into the never-never, sometimes reaching Lake Eyre.

Then we’ll walk across several of the spectacularly empty landscapes that comprise Barcoo Shire: 62,000 square kilometers in area but with a population of only 267.

We’ll see the amazing colours of the ancient seabed that’s now exposed at Cawnpore Lookout. Our next stop is then Combo Waterhole where the incident that inspired Banjo Paterson to write “Waltzing Matilda” took place.

Then it’s Sun Rock Waterhole and Razorback Ridge near Mount Isa where the Kalkadoon people have lived for more than 40,000 years.

After that we cross into the Gulf Savannah.

Our first destination is Boodjamulla National Park near Adels Grove. We cruise Lawn Hill Gorge and then explore the national park on foot, including clambering to the top of the Constance Range for extensive views in every direction over the savannah.

Then we push on to Normanton and Karumba on the Gulf of Carpentaria. We watch the Gulflander crossing the Norman River and pay our respects at Burke and Wills camp 119. Our final stops before heading east towards the tropical coast are the old mining and cattle localities of Georgetown, Forsayth and Einasleigh, and Cobbold Gorge, where we navigate the water-filled serpentine canyon.

When one goes beyond the Barcoo, one travels back in time to places no more crowded and no more spoiled than they were a hundred years ago. 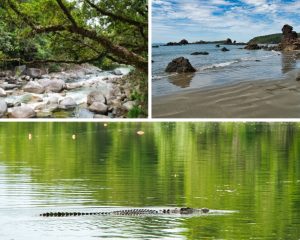 It goes without saying that Queensland’s Tropical North is a very wet place: it rains heavily and often, and it’s been that way for a very long time. Lots of precipitation over more than 135 million years has created unique landscapes, and within them, similarly unique ecosystems.

The Daintree Rainforest near Mossman is part of Australia’s Wet Tropics Rainforest and is the oldest continually surviving tropical rainforest in the world. It’s amazingly dense, and along the coastline north of the Daintree River it grows right down to the edge of the Coral Sea.

The Daintree River starts on the steep eastern slopes of the Great Dividing Range. As it approaches the sea, it’s filtered through thick mangrove swamps that fringe the rainforest. And lurking silently in the mangroves are fearsome creatures that trace their lineage back to the dinosaurs: it’s the perfect habitat for Estuarine Crocodiles.

The Daintree Rainforest contains 30% of the frog, reptile and marsupial species, 90% of the bat and butterfly species, and 7% of the bird species found on the Australian continent. It’s also home to more than 12,000 species of insects.

Lots of rain and warm weather are also ideal for agriculture and roughly 95% of Australia’s sugar cane is grown in Queensland. The Mossman Sugar Mill’s production area stretches all the way from
the Daintree Rainforest to the Atherton Tablelands near Cairns.

Sugar cane used to be burnt before harvesting to drive out vermin. But these days it’s cut “green” by machine – the remaining roots then re-shoot and several crops can be grown before replanting is necessary. And the most efficient way of transporting cut cane from field to mill is via the vast network of narrow-gauge railways.

Moving to slightly higher and cooler elevations brings us to the habitat for Australia’s most unique and rarely seen animal: the elusive platypus. 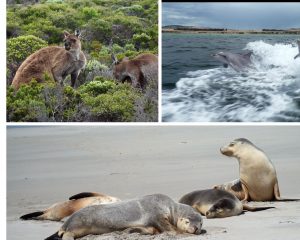 Resolution: shot in 4K and transcoded to HD for projection

Mainland Aboriginal peoples called the island Karta, or “Island of the Dead”.

European explorers believed the island to be uninhabited but this was disproved in the 1930s when shell middens and stone tools were discovered.  Aboriginal campsites have since been found around the island, including one near the seal colony at Cape du Couedic, and it’s now believed that Aboriginal Australians inhabited the island as long as 16,000 years ago and perhaps as recently as 2,000 years ago.

One of the island’s highlights is the frequent encounters with the abundant wildlife, and this starts with the large kangaroo and wallaby population.  The island’s human population is quite small and this probably explains why the behaviour of the kangaroos and wallabies is different from those on the mainland – on Kangaroo Island they’re not all at wary of people.

But perhaps the most enthralling wildlife experience is watching sea lions.  Indeed, we get within a few metres of sea lions by walking on the beach at Seal Bay with a National Parks guide; we also see sea lions from advantageous positions in Flinders Chase National Park at the very remote western end of the island.

We also watch a pod of inquisitive and playful dolphins from within a few metres while sailing on the Bay of Shoals.  The film also shows a brief sparing match in which a couple of immature kangaroos demonstrate their boxing prowess.  And finally, there’s the inevitable imagery of wind-swept grass as the power of the air above the Southern Ocean makes landfall along the island’s fractured coastline. 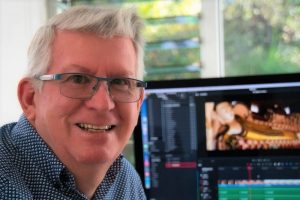 When Arnold finished school in the 1970s, he really wanted to be a cinematographer, but that didn’t eventuate. Instead, he wrote computer software for a living and eventually established his own software engineering business.  Starting in his mid-teens, Arnold cultivated keen technical and artistic interests in cinematography and editing, so when he sold his software business in 2008 he decided to finally become a film maker.

As well as creating his own observational ethnographic and travel documentaries, Arnold was a founder and the President of the Eumundi World Cinema film society. He was also a founder, the principal organiser and the Festival Curator for the Noosa International Film Festival (NIFF) in 2016 and 2017, and the festival’s Technical Consultant in 2018.

In 2016, Arnold received a Queensland Day Medal for his work organising the inaugural Noosa International Film Festival (NIFF).  Arnold has won an international prize for his cinematography and his films have been televised in Shanghai, in Charlotte, North Carolina and in San Francisco.