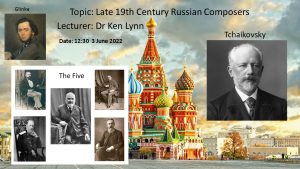 In mid- to late-19th-century Russia, Pyotr Ilyich Tchaikovsky and a group of composers known as The Five had differing opinions as to whether Russian classical music should be composed following Western or native practices. Tchaikovsky wanted to write professional compositions of such quality that they would stand up to Western scrutiny and thus transcend national barriers, yet remain distinctively Russian in melody, rhythm and other compositional characteristics. The Five, made up of composers Mily Balakirev, Alexander Borodin, César Cui, Modest Mussorgsky, and Nikolai Rimsky-Korsakov, sought to produce a specifically Russian kind of art music, rather than one that imitated older European music or relied on European-style conservatory training. While Tchaikovsky himself used folk songs in some of his works, for the most part he tried to follow Western practices of composition, especially in terms of tonality and tonal progression. Also, unlike Tchaikovsky, none of The Five were academically trained in composition; in fact, their leader, Balakirev, considered academicism a threat to musical imagination.

Musical excerpts are given along with pictures.