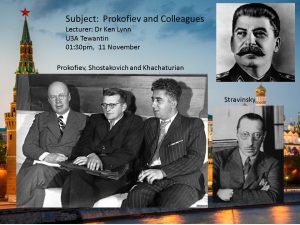 The three greatest Soviet composers of the 20th century were Prokofiev, Shostakovich and Khachaturian. Although very different in background and type of music, they were all lumped together under the stern eye of Stalin who seemed to take delight in alternatively rewarding and then ruining their lives. Of the three, Prokofiev was the only one who spent much time in the west. In 1948 they were accused of “formalism” which meant they had failed to produce the type of music considered by the Ministry of Agitation and Propaganda as suitably instructive and uplifting for the great Soviet proletariat. Their works have always been popular in the west. Their personal struggle through life as well as musical excerpts from their best known works are given in this fully illustrated lecture.

Friday Talk 19 August 2022 1:15 p.m. for 1:30p.m. StartAuditoriumSimon Klapish – Everything you wanted to know about your electricity prices explained!Topics to be covered and discovered:1. In the beginning: The Hilmer Report and the rationale for privatisation2. Corporatization, privatisation, 3. The VIC sell-off, and the new market players4. Improvements in efficiency from privatisation5. The National Electricity Market (offspring of the UK system experience)6. How the wholesale price of electricity is derived – energy bidding7. When Australia became a leading LNG export player, its impact on power prices & the option that Julia Gillard did not take to avoid this8. Carbon taxes, renewables, climate change, and clueless (?) politicians About the Speaker:Simon Telstra to join Hazelwood Power Corporation as its Marketing Executive in Dec 1995, 6 months before the privatisation of the Victorian power and gas industry.The Hazelwood Power Company had a number of ownership and name changes over the next 15 Years with Simon moving through a number of different roles.Simon took a redundancy package September 2018, and now works as a consultant in community and stakeholder relations surrounding the building of various renewable energy projects. ... See MoreSee Less

IDCARE videos - What is HTTPS and why is it important?

IDCARE's How to videos include vidoes on scam prevention & education, device setups and updates, social media privay setting as well as tips for your business.
View on Facebook
· Share