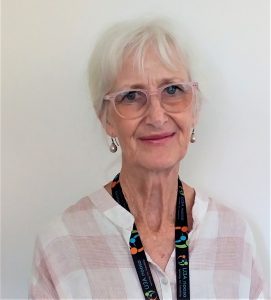 Many of us can identify with Liz Gleghorn’s predicament after retiring from a long and rewarding career, which included nurse administrator, health educator, medical research assistant, supermarket proprietor and school administrator in country Victoria, Melbourne, NSW, Canberra and the Sunshine Coast.

Says Liz: “I went home and sat in a chair for about two weeks, wondering what next?”

She found her answer when, in search of her next adventure, she walked into U3A noosa. That was eight years ago, “and the rest, as they say, is history!” laughs Liz, who has been President of the organisation for nearly two years.

“From the start I could see the value of U3A, the social and intellectual benefits for people who, like me, had come to the end of an enjoyable and stimulating career. U3A noosa is a wonderful community organisation that provides so much … friendship, learning opportunities and a real sense of community and belonging among like-minded people.”

After joining some of the classes, including watercolour painting, history of art and the history of medicine, Liz decided it was time to give back some of what she was receiving from U3A noosa. She first volunteered as a receptionist and, with her skills and experience as an administrator and organiser quickly appreciated, she was invited to join the management committee. Two years ago, Liz was elected President and in that time she has pretty much devoted most of her time and abundant energy to the role.

As to her proudest achievements under her tenure, Liz “hopes that U3A noosa has developed into a more professionally run organisation, with improved operational systems in place”.

“Progress is always going to be slow in a purely voluntary organisation like U3A and that can be frustrating. Waiting for the DA to be approved has tied our hands for the past two years. Now, however, it has been approved so we can move forward, in particular expanding the curriculum and running classes at new off-site venues,” she says.

Although her role as President is demanding, Liz still devotes time to her two other passions: puzzles and painting.

“I’m a real puzzle tragic. I find most puzzles hard to resist, but I am particularly partial to those that encourage lateral and analytical thinking,” she says, and anyone who is a fellow member of U3A’s cryptic crossword class will know she’s awfully good at them. And anyone who has seen her beautiful and delicate watercolours adorning the walls of Michell House will know she is an accomplished artist too.

“I’ve always been interested in art and painting and I have progressed in recent years with wonderful U3A painting colleagues who have inspired me.”

For now, though her focus remains on U3A noosa and with a new semester just beginning she is full of optimism about the year ahead.

“I’m always looking to the future and how we can make this wonderful organisation even better. Members, tutors, the management committee and volunteers, we all have an important role to play.”